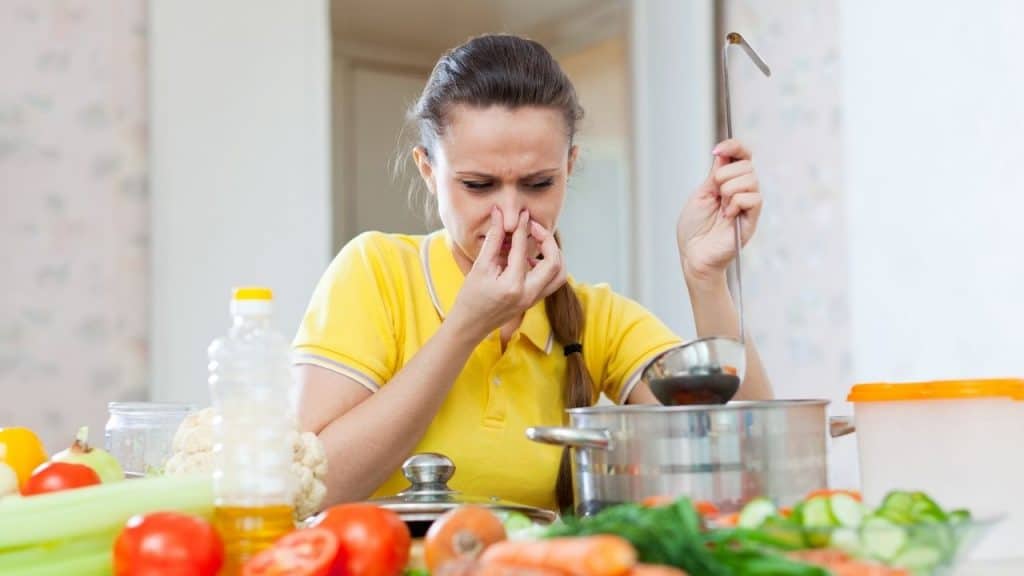 Do Air Fryers Smell Up The House? 3 Reason’s It Can!

Air fryers are among the handiest kitchen appliances that you can get in the market. They're highly compact, versatile, and work well for preparing delicious and healthy meals. But do air fryers smell up the house? Let's find out in this article.

These machines work on convection heating concept, and use hot air re-circulating in their little chamber to get even coating for the whole food surface within and also cook food to crispiness.

So being impressed with its functionality and benefits, you bought your first air fryer, and now with only a few days of usage, you're noticing an unpleasant plastic-like smell either around food or the kitchen.

As the smell of plastic around the house is highly repulsive, it is wise to look out for the problem and get it fixed so the issue can be solved at the earliest.

However, when new buyers get foul smells, they often ask "do air fryers smell up the house"? Similar to other kitchen appliances the air fryer can also emit a chemical or plastic odor.

However, when talking about air fryers, if you're experiencing a “plastic type smell' it naturally gets over with only around 5 to 7 uses of the new appliance. Do air fryers smell up the house?

Similar to conventional ovens the air fryers only smell up a bit upon usage, but unlike the deep fryers, they won't spread greasy odor throughout the house. However, a few models might emit a strange plastic type smell with the very first use.

The smell fades with only a few sessions. However, when the smell doesn't fade, it would be best to clean the air fryer with the removable components through soap, water, and a soft sponge.

If it doesn't show results you can try other convenient methods.

There are a few reasons due to which air fryers emit a foul smell inside the house. The first reason is that the air fryers are available with protective coating straight out of the box.

When the coating gets exposed to higher temperatures, it starts burning and emits an unpleasant plastic smell. The coating burns off completely post few uses and you wouldn't get more burning plastic smells

It can also happen for a long time as a user reported the smell to fill up the kitchen even with only 40 times of total use.

A major reason due to which this happens is that residue of fume gets trapped in crannies and nooks of air fryer and while using it; all these smells get triggered again and it turns to a consistent cycle.

Besides its main unpleasant plastic smell, the air fryers also emit other unpleasant smells that surround the entire kitchen.

Air fryers are known for emitting a burnt plastic smell, but it is not only the smell that it emits. Also, you get poor odor filling the kitchen after using it for a while.

A lot of air fryers provide heating elements and are located at the fryer top and, over time, food particles begin collecting in the particular section leading to a burnt smell emanating through it.

Avoiding occasional cleaning can also result in bad smells filling up the entire kitchen. A lot of users reported unbearable smells coming from their kitchen upon using air fryers.

It is a concern for a lot of people as they don't know whether the unit came faulty or whether the prepared food in the air fryer is safe for consumption or not if it acts that way.

These pungent smells can also be a concern from the outside dirt resulting in foul smells even though the possibilities of such happenings are far less.

Do you need oil for an air fryer?

Let's suppose, you might have bought an air fryer to enjoy the flavors of fried food in a healthy and oil free way, you can still try pouring oil in this appliance without compromising on nutritious food.

Pouring oil in an air fryer is a lot cheaper and healthier compared to using a costly deep fryer. Also it can easily function with a full vegetable oil container. This is a minimum of $3.00 including the food cost.

This can sum up with the air fryer, and even while using this daily, it would consume weeks or months most likely, to have the same quantity.

How much oil should be used in Air Fryer?

While you air fry, you can use anywhere around few sprays or 1 tbsp. of oil according to the food that you're preparing.

Where you can put oil in an air fryer?

While air frying food, you can use oil in food rather than the basket. This also depends on what you're going to prepare.

Using oil misters is amongst the best thing that can be used along with air fryers. Also, you can make use of a basting brush while you're working with larger surface.

How much smell leaves the air fryers?

And the same case is with air fryer, as after the cooking session, with or without using oil, air fryer doesn't have the whole house smelling like grease. It makes an air fryer a great option for little apartments, dormitories, rooms, and also RVs.

If air fryers have a lot of smell, something is wrong with them. And here we're not talking about the chemical and plastic smell, that you face sometimes while using air fryers.

When the air fryer emits a burnt food smell when you cook, then the cleaning routine would require re-evaluation.

Grease residue along with other stains result in the formation of smoke and they also lead to a burning smell on overheating. However, frequent cleaning saves you from that worry.

If you wish to have an odor-free air fryer, the best thing to do would be to ensure that you're cleaning it often. Air frying is unique and you'll know that the oil you've put in is a lot less compared to conventional cooking.

Also, you'll discover having more oil out of food. The oil typically is present at the air fryer bottom drawer and you've got to be sure that the air fryer is clean for avoiding bad smells after a lot of uses.

Recommended Article: Can you Cook two things at once in an air fryer?

A lot of newly bought air fryers emit a certain smell which is completely normal and eventually, it fades away.

However, if the plastic smell has been creating issues for you for a long time, then we hope that the aforementioned information came in handy to help you get rid of these pungent odors.